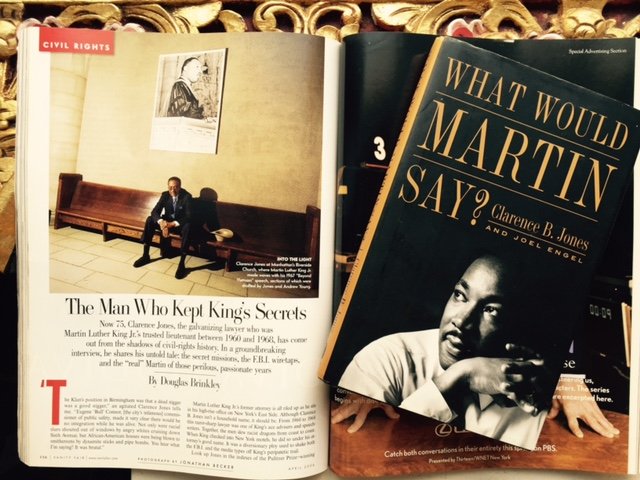 Dr. Martin Luther King’s attorney, and confidant, Dr. Clarence B. Jones, is a DreamDevelopment client who dreamed of telling the story of his work with Dr. King during the Civil Rights Movement. He worked with Dream Development during his 75th to 77th birthdays resulting in a Vanity Fair Profile, his professorship at Stanford University, and the publication of his book, “What Would Martin Say?”  Now 91, Dr. Jones has returned to the DreamDevelopment community of clients as he continues to live his dreams.

Clarence Jones is a pioneer in the civil rights movement, arts, politics, and entertainment.

Jones joined  Dr. King’s legal team at the request of Judge Delaney (brother to the famous Delaney Sisters.) He was a reluctant addition (read his book to find out why.) The case was resolved in King’s favor in May 1960. (SCLC), and he joined the firm of Lubell, Lubell, and Jones as a partner. Jones was also the first African American Attorney at Capitol Records, obtaining the position at the request of Nat King Cole. Along with Frank Sinatra, the Cole was a top-selling artist for the label.

He served as a draft speechwriter and personal counsel to Martin Luther King, Jr. from 1960 to 1968. He was also an Allied Member of the New York Stock Exchange (NYSE) and in the Wall Street investment banking firm Carter, Berlind & Weill becoming the “first Negro” on Wall Street. Jones coordinated the legal defense of Dr. King and the other leaders of the Southern Christian Leadership Conference against the libel suits filed against them and The New York Times by the police commissioner and other city officials of Birmingham, Alabama. In this case, the Supreme Court ruling – Sullivan vs. The New York Times – resulted in the landmark decision on the current law of libel. In April 1963, he drafted the settlement agreement between the City of Birmingham and Martin Luther King, Jr. to end demonstrations and the desegregation of department stores and public accommodations. In August 1963, he assisted Dr. King in drafting the celebrated “I Have A Dream” speech delivered at the March On Washington on August 28th, 1963.